As part of my job, I interact with people from all across the world and spend at least a few hours with them.  I hear a lot about people’s preconceived notions of the Arctic and how it differs from what they imagined, especially in the summer time.  I hope to dispel some of those myths here.

No matter the time of year, many people expect it to be cold during every month of the year. For 8 months of the year they would be right! However, in the summer time (when most people decide to come), I have encountered many people who step off the plane with heavy winter coats, hats and mittens, while I’m usually sweating in short sleeves.  Many are dismayed to realize that it is actually quite warm in the Arctic in the summer.  This past summer we had a day that reached 90 degrees Fahrenheit and it was not uncommon to have days in the low to upper 80s from late May until the end of July.  The warmest temperature in Alaska was recorded in the Arctic.  Fort Yukon recorded a temperature of 100 degrees Fahrenheit.

Due to its high latitude and rotation of the earth, the sun is directly over the North Pole for 6 months of the year, basking the Arctic in endless daylight.  For example, in Coldfoot the sun is up for 33 days straight in the middle of summer.  From June 4 to July 7 the sun does not set below the horizon.  With the sun up for such a long period of time, it is pretty difficult not to have warm temperatures.  People complain about the warm temperatures, but when it gets cold they complain as well.  Hmmm…  The bottom line is if you come to Alaska in the summer, certainly bring warmer layers, but leave the heavy winter gear at home! 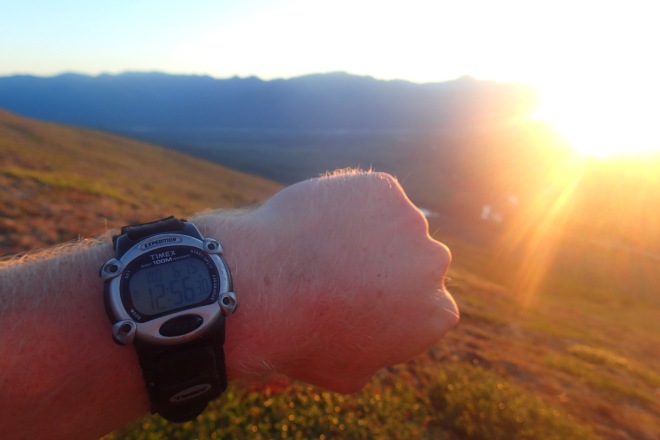 The sun still above the mountains at 1 am on June 15th. Solar midnight in Alaska is 2 am.

Don’t be mistaken though, it is typically quite cold here for much of the year.  In an average year, the rivers, creeks and lakes will be frozen by the beginning of the third week of October and remain so until the middle of May.  From the beginning of November to the end of March the average daily temperature ranges from 40 degrees below zero to 0.  The coldest I have seen so far this winter is -35 F, last Thursday.  About 60 miles east of Coldfoot is likely the coldest area in Alaska.  There is an old mining settlement there called Caro.  It sits at the base of three major river valleys with mountains trapping the cold air that pools at their bases.  In the winter of 1989 there was a man living there who recorded the temperature at -100 degrees below zero Fahrenheit on three separate thermometers!! This is much colder than the coldest temperature ever officially recorded in Alaska at Prospect Creek, which was -79.8 F in January of 1971.  It goes without saying that,that is some serious cold.

The Arctic is covered in snow for and ice for much of the year, but during the summer it is almost impossible to find any snow.  Remember that sun from the paragraphs above? Well, circling around above the horizon for so long melts all the snow from the Arctic Circle to the Arctic Ocean.  You won’t find any snow in the middle of the summer, besides on the handful of glaciers and permanent ice fields. However, it is possible for it to snow in every month of the year (in fact, I have seen this occur).

Something that is surprising to most people is the fact that the Arctic is a desert.  In Coldfoot, we receive about 9 inches of precipitation, with most of that coming as rain.  The average snow depth is right around three feet.  With permafrost (ground that is permanently frozen for >2 years) covering almost the entire landscape, water is not able to permeate through the soil and drain out from the surface.  That is why there is lots of green vegetation in the Arctic, compared with minimal vegetation in the desert.

Another interesting anecdote is that the roads are actually much safer for the most part in winter.  There are nine different types of ice, ranging from water vapor to solid as a result of both temperature and pressure.  Most people in temperate latitudes are used to ice near the freezing point and associate it as very slippery.  In the Arctic, since it is so cold in the winter time, compacted snow/ice becomes a solid.  At -40 degrees below zero, you can stop a vehicle in the same distance on ice/compacted snow as a vehicle on dry pavement.  Even around -20 degrees Fahrenheit, you are only losing about 15% stopping distance.  To maintain the gravel sections of road, they actually dump water on it in the beginning of winter (60,000 gallons per mile!!!!).  It does not become an ice rink, but a solid that makes for excellent travel.  As long as the road is free of uncompacted snow, it is quite pleasant to drive in the winter!

A raven flys over the Dalton Highway just outside Coldfoot.

Despite what the television shows would like you to believe, Alaska (and especially the Arctic), is not a Serengeti.  There is a low diversity of animals that are present here, and of those animals they are present in small quantities.  The climate is too harsh for the majority of the year to provide for adequate food sources. For example, we have moose from the tree line near the top of the mountains down to the valley floor. Yet their density is less than 0.2 moose per square mile.  It takes 5 square miles to have one adequate habitat for moose.  Dall sheep, which live on top of the mountains (and have hair, not wool) are here in even smaller densities. There are 0.1 Dall Sheep per square mile. It takes 10 square miles for one Dall Sheep.  Bears range over vast distances.  Coldfoot is approximately 50 miles south of the northernmost tree. So we also happen to be nearing the northern limit of Black bear habitat (who need trees to climb away from larger bears). Grizzlies range over large territories anywhere from 15 square miles to 100 square miles depending on where you are.  The most numerous large animal species of the north is the caribou.  In the northern third of Alaska there are over 500,000 caribou divided into 4 different herds.  Their population density is less than 1 caribou per square mile.  While you may see hundreds, if not thousands of caribou in one area, there are millions of acres where there are no caribou at all.  Finally, most animals are nocturnal because they can’t stand the warm temperatures, making it even more unlikely to see them during the day, especially near the noisy road!  If you see an animal in Alaska, consider yourself quite lucky! It is a treat!

Not a rare sight! A snowshoe hare munching on food in Wiseman. Notice the white ears and feet, it is transitioning from its brown summer coat to a white winter coat.

Not a myth but persistent question. WHY do you live here?*  Well, for one nobody is forced to live here.  It is a conscious choice. In fact, many people quite enjoy it!  One of the residents in Wiseman likes to respond to this question by saying, “Everyone has a home. Dorothy and Todo live in Kansas. I live here.” That one always gives me a chuckle. While most people these days are content to live among large numbers of people, I am not one of them.  I enjoy living in close proximity to nature, in large wild landscapes.  For those who have traveled here, or at least seen pictures, the beauty speaks for itself.  So far I believe I have found a perfect match, living in one of the last great wildernesses left in the world.   Although, there was one gentleman who was trying to tell me how Vermont was wilder and more remote…

Now that you are enlightened, go forth and preach the good news of the Arctic!

*This is constantly followed up by what are options for medical services/where is the nearest hospital? As if everyone is breaking their legs every other month. For those who are curious, there are no medical services.  The nearest medical services are in Fairbanks, a 6-7 hour drive one way, or an expensive plane ride on the scheduled air service.  People tend not to become ill very often around here.